Last week I said that people don’t eat very spicy food. Really they don’t eat any spicy food, but sometimes there are bottles of hot sauce.  A couple weeks ago we were having an activity at a member’s house.  She had a little plastic bottle of homemade hot sauce made from whole peppers marinating in vinegar and some members (teenage boys) were daring each other to try a little drop. Some of you may know that I looove spicy food, so I put several drops on my soup and they were very worried for me: “No sister, you will die! You will die!”  The hot sauce was extremely delicious, and I did not die, so I haven’t completely lost my spice tolerance yet. Later the same member gave me a little bottle of her hot sauce! I was very very happy!  But it didn’t last long 🙂

Palmares has year-round fruit and vegetable carts in the city center, which is really exciting for someone from Utah where we only have farmer’s markets a couple months of the year (because ‘winter’ is a thing in Provo).  I’m going to be eating very delicious pineapple and cheap mangoes while the rest of you are languishing under two feet of snow!  Hopefully that will help me with the saudade I’m going to feel for Provo’s grocery stores (*sniff* Trader Joe’s *sniff*).  Saudade is a noun in Portuguese that describes the feeling of homesickness or missing something.  I knew food and grocery stores would be really different here, but I didn’t expect it to be quite so different!

It turns out that Brazilians don’t have canned food.  Like, they have canned corn and maybe a can of pre-prepared feijoada (black beans and pork sausage) but that’s it!  I really miss canned tomatoes and canned beans, especially because we’re not allowed to use pressure cookers for safety reasons, so if you want to eat beans you have to use the very slow boiling method with dried beans. I am also going to have serious saudade for sweet potatoes, cranberry sauce, pie, and So Delicious Snickerdoodle ice cream around the holidays, but I think the mangoes and pineapple will get me through it. 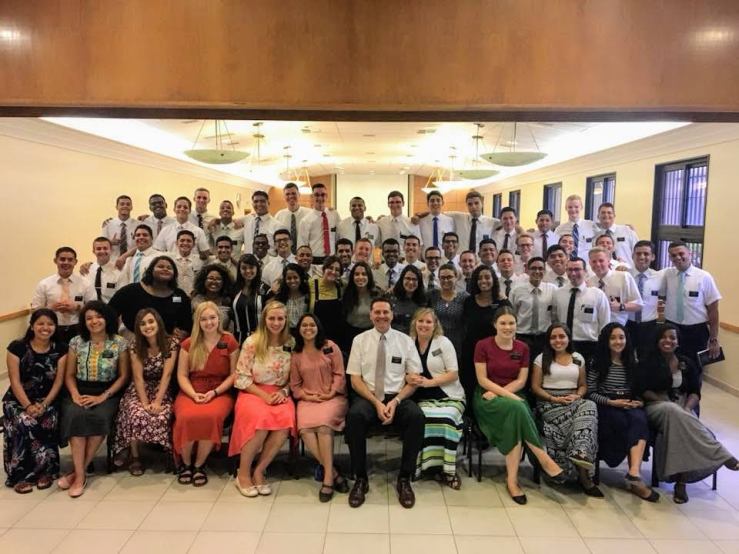 My companion was sick at the beginning of the week, and we also spent a day at a mission conference, so less happened.  We are a little concerned about some new members and investigators who have had trouble making it to church.  But we talked to some members yesterday about ways ward members can help, and I think that will be super great.  Members can help so much.  We had one man this week who told us that he felt really accepted at church.  A young boy in a tie walked up to him his first Sunday and said “Welcome to our church!” and shook his hand, and that was a really big deal for this man.  It was a good reminder for me–when I get back from my mission I want to work on doing little things to make people feel welcome–members and non-members.

It’s really great to see the people we’re teaching develop testimonies.  Some people we’re teaching don’t know much about scriptures or religion (e.g., we were explaining what God does and who Christ is the other day), but they have a strong testimony that God will tell them where they should be.  It is so great to hear their testimonies when they receive that witness.

Sister Hannah Faulconer returned from her mission to Recife, Brazil for the Church of Jesus Christ of Latter-day Saints in March 2020. She trained at the Centro de Treinamento Missionario (CTM) in São Paulo, Brazil in Fall 2018. She served in six areas, all in the Brazilian state of Pernambuco: Palmares, Gravatá, the Casa Forte and Madalena neighborhoods of Recife, the Candeias neighborhood of Jaboatão dos Guararapes, and Goiana. Her letters home were published here on the website by Angela Faulconer, who edited and added relevant links, pictures, and tags. View all posts by Sister Faulconer

Search within the site