Today we left our house at 8:30, went straight to the bus station to go the American consulate, and didn’t get back until 3:40!  We spent a very long time in front of the American consulate waiting for Sister Sousa’s interview.  She got approved!  The hours in the rain were worth it. She is going to pick up her passport in ten days.  Nothing happened with transfers–we’re going to stay here together.  Consequently I am extremely curious about what will happen when she goes to the Missionary Training Center in Provo, Utah [before beginning the English-speaking portion of her mission in Edmonton, Canada].  But we don’t know what day that will be either.  Lots of unknowns!

Arthur had a recaído [relapse] this week. Anyway, it was sad, because he smoked 10 cigarettes, and that made it hard for him the rest of the week.  But he is still working hard, so here’s hoping everything works out. We also had trouble with contacts – we had a running joke this week that all the elect people in contacts turn out to be from Vasco.  We had so many references for Vasco.  We still haven’t passed them all on.  We talk to people who are sitting on porches in the middle of a little neighborhood — and it turns out the person is visiting from a different city!  Another reference.  The running joke got a lot funnier on Sunday. We had a miracle: the server at the luncheonette where we ate lunch one day called us to confirm the Sacrament Meeting time. We had invited him to church and read a scripture with him — but he had to leave so it was really fast. He said he would go, but I have never once seen a street contact show up at church. I always hope they will show up, but it has never happened. But he showed up!  All by himself!  He said it was different but he liked it and wanted to learn more. But when we introduced him to the bishop, we found out that he was actually from Vasco! That was pretty funny. And a little sad. I have faith that one day the elders from Vasco will find us someone awesome!

Caroline and Luan are going to start the marriage process tomorrow!  I am super excited. We have been having lots of trouble getting into their house to teach them, because they keep cancelling on us.  But this is progress!  Hopefully we manage to teach them this week.  We met a number of good people in contacts last week that I am excited to teach this week.

This week it has been raining quite a lot.  People had been telling us that it was the least rainy, hottest winter they’ve had here in a while.  After this week, I´m not sure if that’s still true!

I’m very excited for Christmas! It’s great to be a missionary at Christmastime — we get to spend all day inviting people to be more Christmassy by coming unto Christ.  It’s also fun to share the church’s Christmas program with people (Illumine o Mundo — Light the World.  I remember watching videos from the church’s program other years with the missionaries and now I’m the one presenting the videos!

We had some wonderful little miracles this week with finding people.  When we had a division [when you switch companions with another sister temporarily] my sister training leader and I marked a man named “Daniel” for baptism.  He didn’t give us his address because he didn’t spend any time there and apparently it’s hard to describe, but he was really special and I wanted to teach him again.  He said he would visit the church but wasn’t able to go on Sunday.  Two weeks later our investigators (reference of a recent convert) gave us a reference of a neighbor, “Douglas.”  On Sunday we took “Douglas” to church and I asked him about his family.  He started talking about his siblings — and I recognized the description of one of them.  “Daniel” is his brother!

This is the son of a member in our ward.  He is great. He is showing off his cool clothes here.  It is too hot outside for that jacket!  He is getting surgery right now so he can use some prayers.  We are at the grocery store.

[For regular readers of this blog: it turns out there was a letter from Sister Faulconer last week that somehow didn’t get sent. I added the text to the pictures in last week’s post.]

This week I have been thinking a lot about how God prepares people for the gospel.  It is really amazing!  This week we decided to follow up on some references–addresses of people in our area that ask for a Book of Mormon, or that meet missionaries in another city.  We got everything ready and went to the bus station, only to discover that no buses were leaving for Ribeirão for several hours.  So we went to a different city, and returned to the bus station another day to go to Ribeirão. We had two references there, so we walked around asking people if they knew either address.  Everyone said, “You have a reference point?  I don’t recognize these street names!” But finally we found some people who pointed us in the right direction for one of the references. 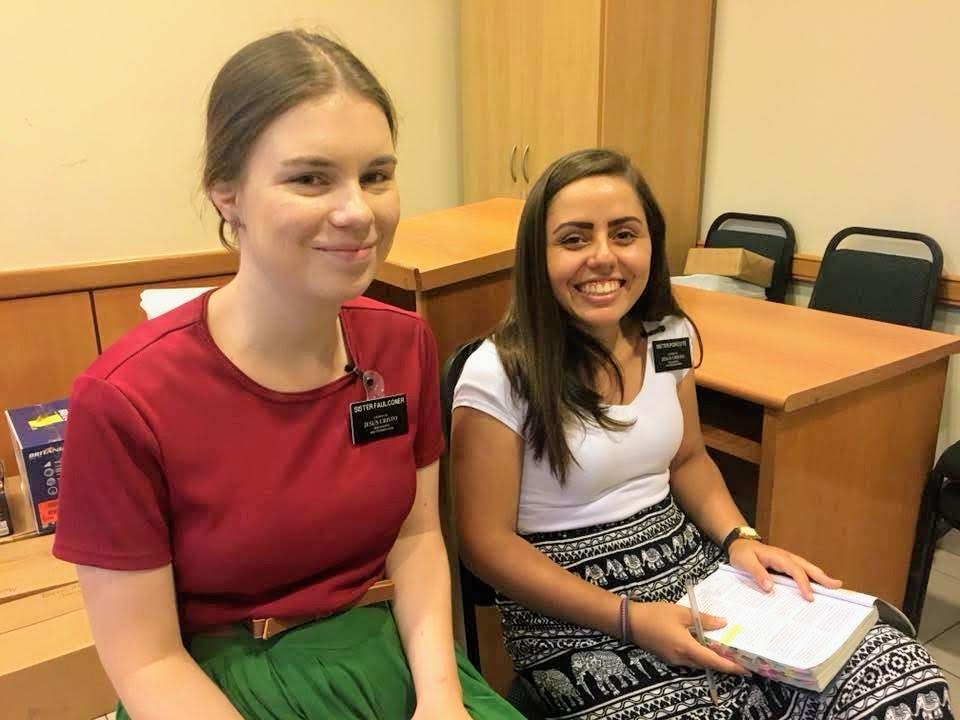 We clapped at the door [similar to ringing the doorbell in the U.S.] and then we waited, and waited, and called again, and waited, and finally someone opened the door (We’ll call him José, pronounced Jo-zay).  José is a history professor who is super interested in American history and loves to read.  He read about “Mormons” (nickname for members of our church) and was intrigued by our emphasis on education, families, dressing respectably, etc.   A couple years ago he found a moth-eaten Book of Mormon on a friend’s book shelf, but couldn’t read much because of the damage. Then he ran into missionaries once or twice, but could only speak to them for about two minutes.  Finally, he found a little more info online, and asked for someone to send him a Book of Mormon.

And then he waited for months (Someone did not contact their references quickly.  Bad missionaries!).  Finally we showed up on Wednesday afternoon, the only time he’s free the entire week.  The rest of the week he’s either working or studying for his doctorate, so he is literally never home except for Wednesday afternoons.  Usually he doesn’t answer the door, but this time he decided to see who it was.  It was amazing — he is super knowledgeable about religion, but that does not get in the way of his spiritual abilities.  We gave him a picture of Joseph Smith’s first vision, and while we were explaining it he turned it over and started to read the text.  Then he said, “Wow, this scripture really touches me.” It was Moroni 10:4, a scripture we often share with investigators.  But he beat us to it!  I invited him to follow Christ’s example and be baptized once he had received confirmation by the spirit that our message was true, and he agreed immediately — just completely nonchalantly as if it was the obvious next step.   It was a miracle!

Love you guys!  Hope you all have an awesome week!